What is Forest School?

The Forest school methodology has been inspired by the Scandinavian approach to children’s education which attaches great importance to the place in which learning occurs.

The Danish Udeskole (open air infant school) is backed by decades of experience and is based on deep-rooted principles of learning through contact, play and exploration.

In the 90’s in the United Kingdom this method was called Forest School and in 2011 the British Association of Forest Schools was created. From then on, the Forest School methodology took on international relevance. Today there are successful projects all over the world including Canada, the United States, South Africa, Singapore, New Zealand…and Valencia!

Forest School is a long-term process of frequent and regular sessions in a woodland or natural environment, rather than a one-off visit. Planning, adaptation, observations and reviewing are integral elements of Forest School.

Forest School takes place in a woodland or natural wooded environment to support the development of a relationship between the learner and the natural world.

Forest School aims to promote the holistic development of all those involved, fostering resilient, confident, independent and creative learners.

Forest School offers learners the opportunity to take supported risks appropriate to the environment and to themselves.

Forest School uses a range of learner-centred processes to create a community for development and learning.

Other aspects of our methodology include:

Free play, respectful, self regulated and uninterrupted is a fundamental aspect in both physical and mental development.

The opportunity to learn about the world around us in a self directed way through Awe and Wonder.

Exposure to controlled risk to build resilience, self regulation and self esteem.

The importance of process over result.

Respect for the rhythms of each participant to develop meaningful learning.

Freedom to choose how to work (individually, in groups, actively, passively…).

Creative problem solving. We do not give answers but help to guide the search.

Personalised and responsive planning adapted to meet the needs and interests of the participants at all times.

Making the most out of the minimum resources.

Using positive and constructive language (what can be done rather than what cannot).

The books and stories that we use are carefully selected to ensure that their content is appropriate to our methodology and principles.

Our team games are based on the Fluid Learning methodology that seeks a deep and meaningful reconnection with nature as well as fostering collaboration and emotional well-being.

We abide by the six principles of good practice of the Association of Forest Schools in the United Kingdom.

We carry out sustainable environmental management and participate in environmental initiatives such as La Gran Bellotada Ibérica or the Banc de Palla dÁrrós de ‘Albufera.

Our fundamental pillar is respect.

The Forest school methodology works on the norwegian principle that “there is no such thing as bad weather, just bad equipment”.

For our sessions to take place successfully within these principles two things must be taken into account: 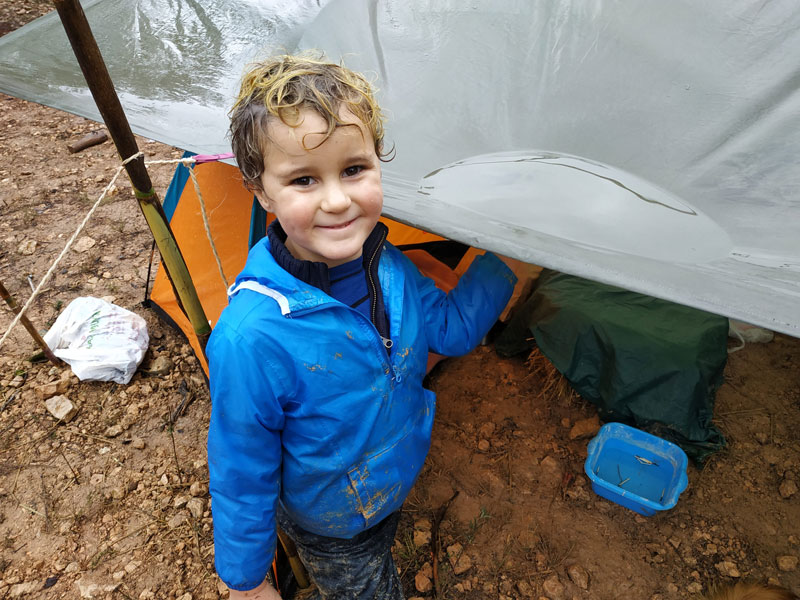 Even though I attended a school made of suffocating concrete and grew up in noisy cities, my best childhood memories are green, free and wild. Nobody explained it to me but it was not necessary, I understood I am an animal from the beginning.

After finishing university I decided I was not done flying and what was supposed to be a short exploration of what is different became more than a decade of adventures in the United Kingdom. There I was a consultant, an activist, a drummer, a volunteer… I lived in a boat, slept under the stars, danced around bonfires, learned to love the cold… and I became a teacher.

I started as a Teaching Assistant in special schools, an experience that was hugely transformational not only professionally but also personally. Next, I became a KS1 Primary School Teacher in working class neighbourhoods of London in a country where two thirds of children between 5 and 12 years old spend less time outdoors than a prisoner.

Back in Valencia I had the great opportunity of getting involved in alternative education and another transformational moment happened: I understood that education does not have to be what until then I had believed was the only way.

Finally, I felt I wanted to lead the change I wanted to see and once again I chose adventure: Bosque Escuela La Tribu was born and from its seed grew Valencia Forest School.

My childhood experiences in nature, the freedom to explore, the adventures I had with my sisters growing up were experiences that have had a huge influence on who I am as an adult. We swam wild in rivers and freezing oceans long before it was fashionable. We played, explored, collected treasures, built dens and made art with what we found, we cooked outdoors on wood that we collected ourselves, sang songs around the campfire and slept under the stars. Weekends were spent exploring “Lets just see what’s around the next corner” was the phrase that propelled our tired legs onwards on so many adventures.

I spent a lot of time in the classroom as a child but the knowledge and skills that I gained in nature are those that I have retained the best and I value the most. I learnt how to be alone and how to work in a team; to try new things and to practice the things I already knew; to fail at something and start again from the beginning; to look at the world around me and to understand my place in it.

I studied art, maths and physics and I continued to university to study Fine Art. I went on to train and work as an art and textile teacher in Liverpool. I continued my career for a decade gaining experience in management, running the expressive arts program in a large secondary school…And along came motherhood It changed the trajectory of my career and my outlook on education. I spent time watching my children grow, following their rhythms and passions and found that they had as much to teach me as I did them. When my eldest turned 4 and started school I watched as his natural enthusiasm and happiness faded.

This was the beginning of my adventure into the world of alternative education that via homeschooling and flexischooling brought me to Spain. It was here that I made the connections that would lead me back to the wild. It is a passion that I have always carried with me and training as a forest school leader renewed my faith in education. I am proud to be able to offer children the opportunity to grow wild and free here in Valencia.

Piña and Monte are best friends and the stars of our Forest School.

Piña was rescued when she was a year and a half old. She has a heart on her cheek. She loves it when children stroke her lioness hair, playing fetch, getting messy in mud and eating napkins. Although she is nearly four and looks like an oldie, her soul is that of a puppy. Piña is also very free and wild and she loves running away.

Monte was rescued when he was five years old. He has massive ears. Monte is next level when it comes to loving being stroked. He has the soul of an old man and would wear a robe all day if he was a human.

Our site is on the west corner of the Urbanization Les Traveses on the outskirts of the town of Llíria and half an hour from the city of Valencia.

Our Base Camp is an old carob cultivation field. The site is surrounded by a beautiful mediterranean woodland with views of the Serranos mountains. We also have a stream and old shepherd buildings (Catxirulos) that give the Forest School a magical character that helps us capture the imagination of the participants and encourages their immersion in the sessions. 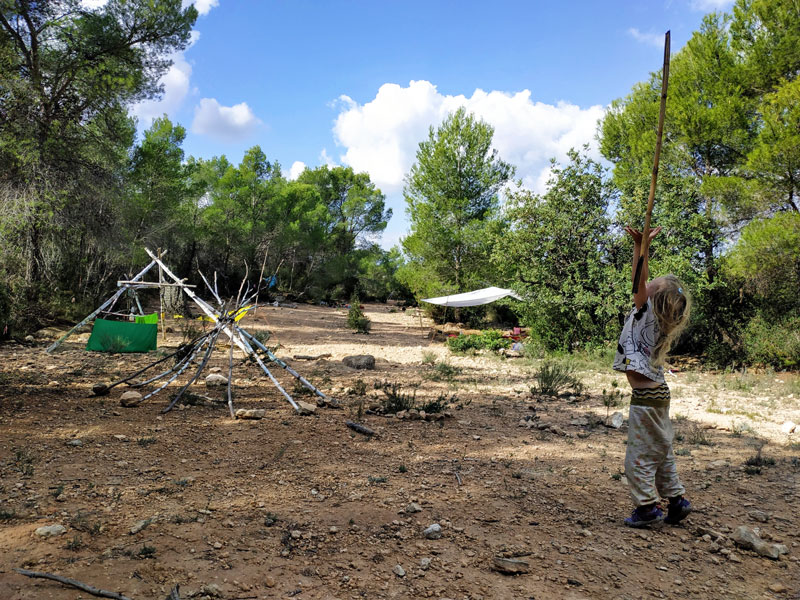 One of the characteristics of the Forest School methodology is the simplicity and direct contact with nature throughout the seasons. It is for this reason that our site starts every morning as a blank canvas and it is during the session that temporary structures appear only to disappear again before we leave for the day.

Manage consent of cookies
We use cookies to personalize content and ads, provide social media features, and analyze our traffic. You can use the cookies settings to change your preferences.
Manage options Manage services Manage vendors Read more about these purposes
See preferences
{title} {title} {title}